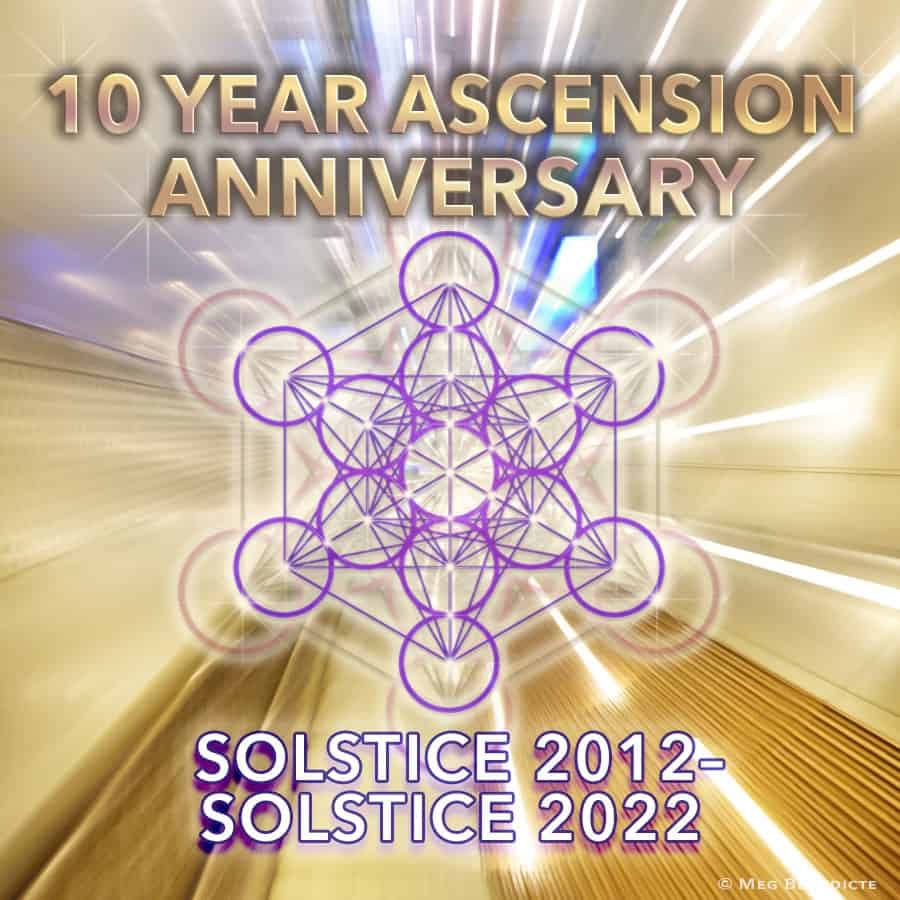 We are currently experiencing the active 12:12 Gateway portal until December 21st, the 10th Anniversary of Solstice 2012. On this sacred day we welcome the return of Light in the northern hemisphere. Much has been unlocked since the 12:12 Gateway was opened directly to the galactic center at 26° Sagittarius. The Solstice initiates a new season at zero degree Capricorn while the solar system is aligned with the galactic center at zero point.

The Solstice occurs when the sun ‘stands still’ between light and dark. It is the ‘zero’ balance point of all creation. It is also the day the Sun enters Capricorn, an earth sign, initiating a change in seasons. It may feel like you are suspended between the old dying system and the New Earth explosion. It is a universal ‘pause’ as everything goes to zero. It initiates a global restructuring of human consciousness. While the portal to the galactic center is open, the crystal wave DNA has been attuned to higher dimensional frequencies.

When we connect to the 12:21 Solstice, we are in the stillness of universal balance in the Circle of Life. We have much to be grateful for during yuletide, as the world is awakening and shifting into higher consciousness. 12:21 signifies the ‘mirror effect’ of opposites. The 12:21 Solstice is a moment when balance is required, everything that is out of balance is felt intensely. As the Aquarian Era intensifies, we celebrate the sacred marriage of the divine feminine and masculine gifts in harmony and balance. We are forging a new society of conscious coherence.

The Aquarian galactic reset ripples into every area of life. Whatever you initiate during the 12:12 – 12:21 Gateway will ripple into the quantum field of all possibilities. As you near the annual Solstice on December 21st, let your imagination run free in the quantum holographic field. You are birthing your Soul’s destiny in a new era.

On December 21, 2022, we honor the 10th Anniversary of the galactic event that initiated the planetary shift. It is incredible to see how much has changed in the past 10 years. Since momentous 2012, the world of infinite possibilities is peeking through the collapsing veils. The hierarchal mind conditioning is dissolving. Humanity is connecting all around the world. More and more souls are awakening to the new paradigm.

All of creation spirals in circular rotation, in morphic fields of coherence, fueling forward momentum and evolution. Gaia has entered an accelerated spin cycle, initiating rapid advancement as a conscious, living being. On 12-21-12, the quickening hit light speed. Where were you on Solstice 2012? How have you spiritually awakened and evolved in the past 10 years since Solstice 2012? It is truly astonishing!

We have been gradually transitioning from the Age of Pisces into the Aquarian Age for some years now. As we clear ourselves from the collective karma during the Age of Pisces, we embrace more enlightened freedom (Aquarius). The Demagogues of the past Piscean Era will no longer continue in the Age of Aquarius.

The past 10 years have revealed how top-down hierarchical systems lead to corruption and power imbalances that are not in the best interest of society. The lessons of the Patriarchal Era are embedded in the hearts and minds of humanity. It is unsustainable. As long as the world is ego-driven, humanity will struggle to achieve the Aquarian ideals of individual freedom within thriving societies.  The path of progress forward requires shifting into the new heart-driven circular system of unity consciousness.

Some of the shifts we can expect in the New Earth circular operating system:

It is time to celebrate the 10th Anniversary of the seed moment of the cosmic Ascension! As we join together from all around the world, we will seed the planetary field with new earth templates, consciousness and holographic inserts as we alter the course of humanity. We will flood the field with LOVE vibration! As we gather together with AA Metatron, let’s spread zero point balance into all the sacred sites, into the crystal grid, into the stargate portals and into the collective community.

As we gather with the Family of Light, we will travel to the galactic center to accelerate and activate the next 10 years of Ascension. If you would like to participate, register here: https://newearthcentral.com/?p=254619