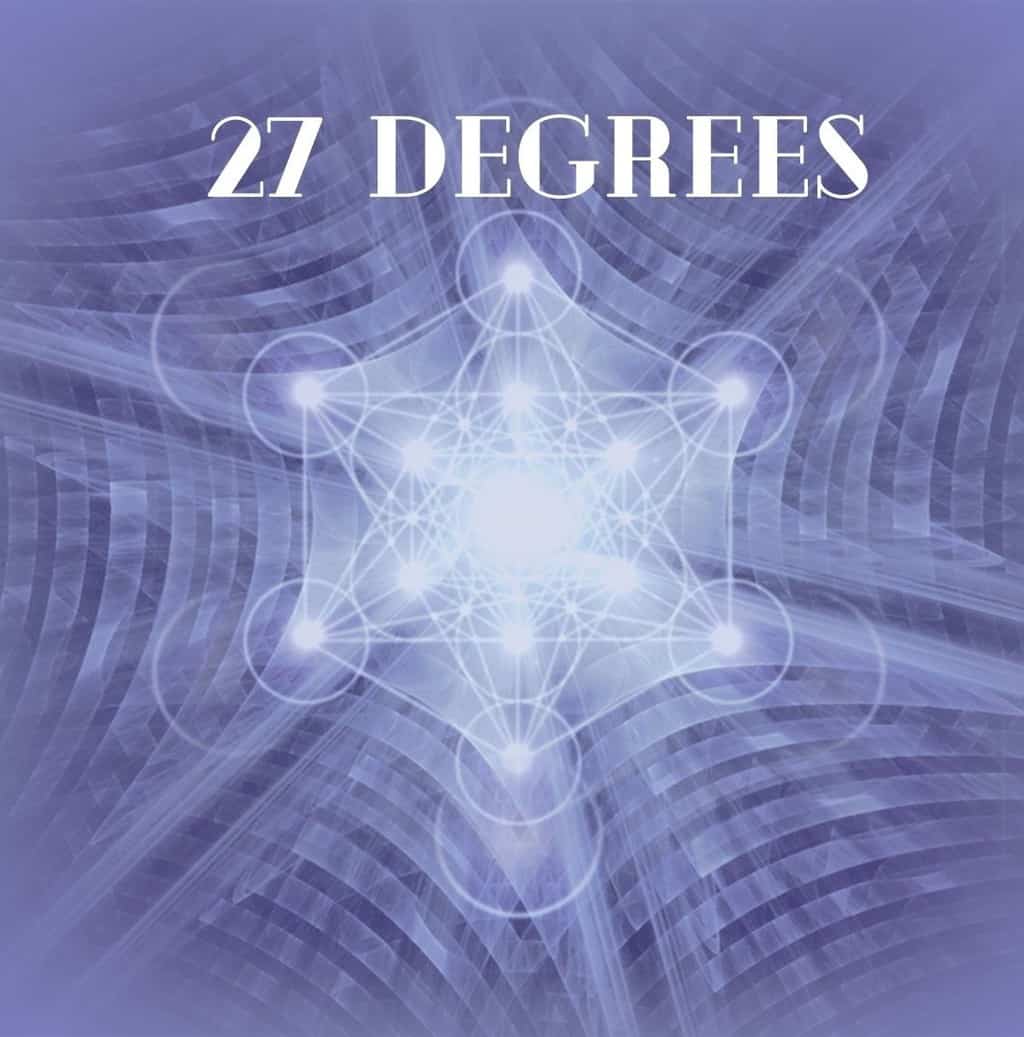 Working as an Energy Healer, I am always looking for repeating patterns that ‘jump out’ from the vast quantum field. When patterns repeat in short bursts within a condensed timeframe, intensity builds and amplifies. This week is one of those times. There is a powerful burst of energy aligning at 27 degrees in the approaching astrology.

In astrology, any planet in a late degree is going to throw more weight into the mix. 27° is also one of the esoteric Starseed Codes. This week’s astro alignments:

These cosmic events illuminate how we can achieve more self-love, self-value and security. The combination of Mars, Venus and Leo Full Moon forge an intense heart-opening expansion. The Sun in Leo square the lunar nodes inspires you to create a life that better reflects your Soul truth and destiny. The Nodal Taurus-Scorpio axis is the most spiritually transformative sign of the zodiac.

Although the cosmic lovers, Venus (feminine) and Mars (masculine), are holding hands all month, they will conjunct Pluto at 27° Capricorn soon.  This week the world arrives at karmic crossroads that could lead to revelation, reckoning and redirection. Much is coming to light in America, as Pluto returns to natal 27° Capricorn on its first orbital completion since July 4, 1776.

It happens every 248 years. In astrology, Pluto rules death and rebirth, the end and beginning of new karmic cycles. A Pluto Return signifies the end of empires, the changing of guards, and the transfer of power. During the slow buildup and ripple effect of the US Pluto Return, we are seeing and experiencing massive shifts in traditional American values and the American dream. There is an epic battle in progress between white exclusivity and all-American inclusivity.

The superconjunction of Venus, Mars, and Pluto occurring during the 222 Gateway is encouraging everyone to make peace with their Shadow Self. America is confronting its shadow as well. All needs to be revealed in the Light of truth in order to be transformed. We are being inspired to develop within ourselves an inner safe sanctuary during tumultuous times.

In astrological study, the most popularly used set of degree symbols, the Sabian symbols were produced in 1925 by clairvoyant Elsie Wheeler. They are symbolic of the meaning of each degree of the zodiac. Since this week has significant 27 degree influential patterning, it is interesting to investigate further.

“Calm wisdom that grows with age. In time the role-playing sheds its glamour and the glitter and shine are replaced by a depth of beauty and peaceful joy. With age we become aspects of the culture, representatives of our tradition and holders of its deepest wisdom. This inner wealth is a cornucopia of gifts, and a person who draws on these hidden reserves of skill is paying tribute to what is the heritage – the soul.” from Sabian Mysteries by James Burgess

“This Symbol shows being able to climb high, to rise to occasions, perform well, have a mission and, probably most importantly, to embark on spiritual journeys. Many people travel, but more often than not it implies a spiritual striving; an ascent in consciousness and the ability to transcend earthier, more immediate matters. There is always the desire, or the need, to strive further, to learn more on the path to understanding and transcendence. You may want to follow those that have gone before to achieve a true sense of inner fulfillment. Work towards your own ‘mountain top’. The effort may be great, but so are the rewards. Ascent in consciousness. Setting off on a mission. Spiritual, material, corporate or political striving. Rarefied atmospheres. Spiritual journeys. Striving for the highest office. High moral stand with no depth of feeling. Feeling ‘high above’ others. Cutting off. Aloneness and separation. Haughtiness. Intellectual snobbery. Untouchable.” from A Mountain Pilgramage by Lynda Hill

“Purpose gazes right down the middle and sees that the way is clear. The internal adversary lurks under, around, and through things and is supremely doubtful of everything you see and know. This only provokes the purposive one to become higher and mightier, more commanding and domineering–which in turn incites the adversary to more radical sabotage by denying your own worth in a savage fashion. Each side pushes the other over the edge. You are karmically at a crossroads, trying on for size strong selfhood and its inevitable shadow of pervasive doubts and negations. Learning and discovering arduously how to stay with yourself, even while going against oneself. And thereby outlasting the adversary, and proving that one can do the impossible, even when one is one’s own fiercest critic and hardest-to-impress audience.” from Developing Your Soul Biography Using the Chandra Symbols by Ellias Lonsdale

Pay attention to 27 degrees patterning in the field. Pluto is the Master of the underworld. Venus, Mars, and Pluto conjunct at 27° Capricorn enlightens and reveals our connection to the hidden, darker regions of life, to the Soul perspective, to the secrets and hidden depths in any situation, to the realm of dreams and death and altered states. We are being called to collect our Shadow Self.

The 222 Gateway of Divine Mother/High Priestess is still active at peak intensity until February 22nd. Take advantage of this powerful gateway and plant your seeds for 2022. Let’s immerse in the Divine Feminine infusion and spread world peace and Love to all life on the planet. This is a rare, golden opportunity to ignite more yin power within your Soul’s Light Body. The High Priestess is guiding you to walk in integrity on your Soul path!

Join other Earth Keepers and Star Beings from all around the world on Tuesday, February 22nd, as we receive the galactic feminine infusion. The show is recorded for replay. If you would like to participate, register here:  https://newearthcentral.com/?p=253326