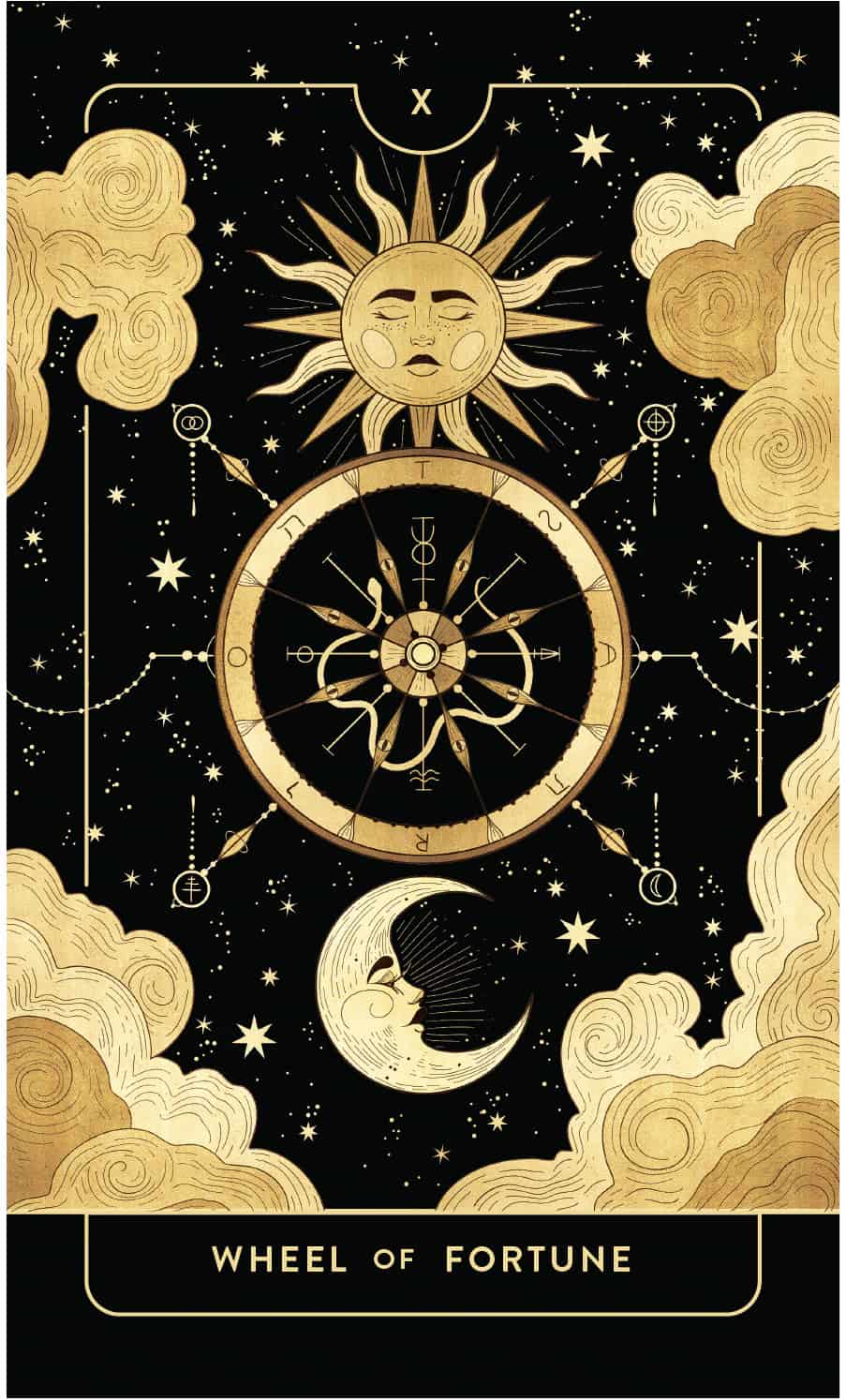 As we travel through the eclipse corridor, there is an accentuation of the Eclipse Magnifcation in effect. Envision standing between two eclipse gateways, the Taurus Solar Eclipse and Scorpio Lunar Eclipse, suspended at the hinge point between your past and your destiny. It is a potent quantum flash point of fluctuating future possibilities. It hinges on how much we can release of the old and receive of the new.

Just hours after Saturday’s solar eclipse activations, I received surprising news that my summer Airbnb was cancelled and refunded. Last year I reserved a beach rental to escape the annual toxic smoke from wildfires in my town. It is starting to become uninhabitable during fire season, so I’ve been looking into relocating between July and October whenever possible. As my summer plans disintegrated, I kept seeing an image of tarot’s Wheel of Fortune. All is in motion as the wheels are still turning. It was an epic Uranus in Taurus Eclipse redirect!

“Watched over by the Sun and Moon and covered in symbols of ancient mysticism, the Wheel reminds us of all the possibilities in the soul’s journey, and the sacred process of cycling through them. Situations both good and bad can change in an instant, and we will fall in and out of good fortune. If you are able to maintain an inner equilibrium of clear-mindedness, presence, and self-care, you will be prepared for whatever life throws at you.” Written by Jenna Opsahl for the Divine Feminine Tarot Deck (image) by Cocorrina.

We are arriving at a ‘choice point’ as the ‘wheels of change’ compel us to make a decision between multiple possible scenarios. Eclipses initiate great evolutionary change, new cycles, resets and deep inner transformation. All this leads to a 2nd powerful total Lunar Eclipse on May 15/16 at 25° Scorpio opposite Uranus in Taurus, visible in South/West Europe, South/West Asia, Africa, Much of North America, South America, Pacific, Atlantic, Indian Ocean, Antarctica.

Lunar Eclipses ripple through the emotional self, as obscured feelings become crystal clear. The blood moon eclipse in Scorpio reveals hidden truths, desires, and feelings in a push-pull between stability and personal growth. This is a cathartic ‘releasing’ south node eclipse, encouraging us to let go of old karmic patterns and emotional baggage. The eclipse gateway is highlighting what we need to release from our lives if we want to live in alignment with our true values.

Additionally, the Lunar Eclipse in Scorpio is occurring during the bi-annual Pleiadean Lineup. The Pleiades star cluster, often called the Seven Sisters, is located in the constellation of Taurus. Our solar system orbits around Alcyone, one of the seven Pleiadean stars. Twice a year, in May and November, a gateway is activated to the Pleiadean star system, called the Pleiadean Lineup. When our Sun transits the galactic 25, 26, 27 degrees of Taurus or Scorpio, we are in astronomical alignment with the Pleiades. It is a powerful time for all Starseeds encoded with the Pleiadean bloodline, as well as a time of collaboration with our galactic family during Gaia’s acceleration.

Calling all New Earth Wayshowers, Master Alchemists and Star Beings from all around the world to gather on Monday, May 16 for the Lunar Eclipse Gateway Activations. Journey to the Great Central Sun and fulfill your Soul destiny in birthing the New Earth paradigm.  Register Here: https://newearthcentral.com/?p=253824