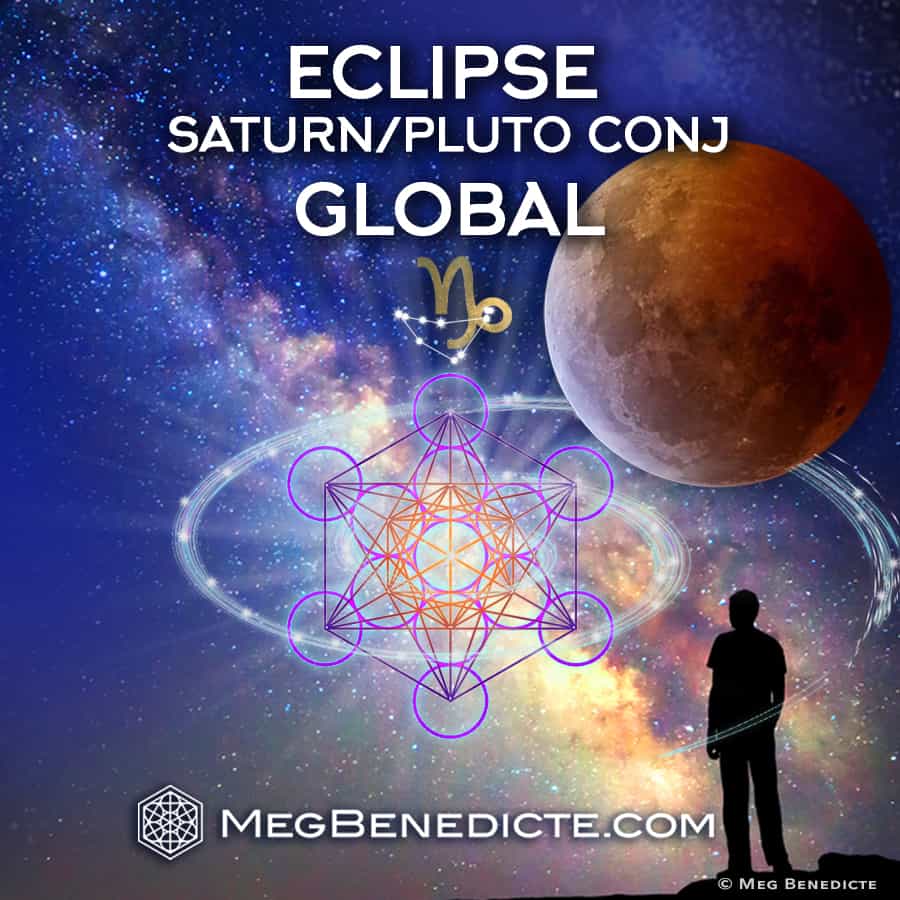 We are entering eclipse season in the Capricorn-Cancer nodal axis.  The first eclipse is a benevolent Solar Eclipse on December 25-26 (depending on time zone) on the south node at 4° Capricorn. This fortuitous eclipse is enhanced by Jupiter trine Uranus – bringing happiness, optimism, positive growth and pleasant surprises just in time for the holidays. You don’t want to miss this opportune moment to set your intentions for a favorable 2020.

The Capricorn Solar Eclipse falls close to the Saturn/Pluto conjunction building towards exact alignment on January 12th. All this cosmic activity in earth sign Capricorn is fueling a global karmic reckoning for past power abuses. As we confront and resolve past wounding, we propel ourselves into awakening consciousness and Soul embodiment. As the Sun and Moon align with the Saturn/Pluto conjunction in Capricorn, the out-dated structures collapse under the pressure. Whatever does not serve the highest good is breaking apart.

The second eclipse is a Lunar Eclipse on January 10th at 20° Cancer. All lunar eclipses concern the emotional body, as Cancer rules the emotional environment. This year’s Cancer Lunar Eclipse on the north node is directly opposed by Mercury, Saturn, Pluto, and Ceres in Capricorn…forming a tense challenge for those sensitive to energy. This is not a warm, fuzzy eclipse – but rather a spotlight on oppressive authoritarian tendencies.

The cosmos is preparing us for the game-changing Saturn/Pluto conjunction which will send shock waves through societies structures, corporations and institutions. All power abuses will feel the impact. The Cancer Lunar Eclipse exposes the dark side of emotional manipulation and dictatorial bullying. The world is reaching the end of a long cycle, the final days of imbalanced, polarized forces.

It only happens once when Saturn and Pluto form an exact conjunction on January 12th– but it will ripple through the collective like a tsunami. Saturn and Pluto form a stellium at 23° Capricorn with the Sun, Mercury, and Ceres, square Eris in Aries. Capricorn represents the establishment, multinational corporations, superpower governments, global religions and large trading blocs. Saturn and Pluto concentrates power in authoritarian propaganda, greed, corruption and domination.

Eris in Aries square Saturn/Pluto conj ignites reactionary protests and rebellions against oppression and injustice. As fascism spreads, the people’s revolution gains traction. This tense opposition fuels a momentum for radical change in global systems. The fascist contrast propels new thought, new foundations, and new lifestyle choices. This is an empowering moment in history. It is a time for conscious change – our moment to birth the New Earth paradigm.

Join other Light Bearers, Gridworkers, and Star Beings from all around the world, as we gather on Saturday, January 11th to broadcast our Lunar Eclipse – Saturn/Pluto Conj Global Activations. The show is recorded for replay.  If you would like to participate, register here: https://newearthcentral.com/?p=211429