Step into the Quantum Vortex and ACCELERATE your energy frequency and ascend into living as a Divine Human.

Quantum Access® is the Universal Tool of Alchemy for evolutionary ascension. Alchemy is the ancient path of spiritual purification and transformation; the expansion of consciousness and the development of insight and intuition through visual images, pictographs, and sacred geometry. The science of Sacred Geometry follows the fundamental principle that all physical reality originates from the quantum field according to a universal framework of geometric structures, mathematical ratios, harmonics and ordered proportion.

In 1994 Meg experienced a profound spiritual awakening that activated her unique portal access to the quantum field. Working closely with AA Metatron, Meg developed the unique healing modality Quantum Access® for clients and students to quickly shift consciousness, unlock karma and remove energetic patterns so they can accelerate their personal Ascension.

e source of Quantum Access® originates from the soul of the highest archangel of the Kabbalah, AA Metatron. The 12 around 1 geometric blueprint of 12 interlocking circles found in Metatron’s Cube geometry connects us to the infinite dimensional grid programs of universal holographic realities.

The method of altering physical reality is the sacred tradition of Alchemy that was taught in the ancient Mystery Schools. The pre-dynastic Egyptians were initiated in Alchemy and could access the untapped power of Zero Point energy, the source of Creation (genesis) in our Universe. Through a series of initiations, the Egyptians learned how to gradually master the universal technology required to shift gravitational fields and particulate matter.

By tapping into the phi spin of Metatron’s Cube, we can integrate Soul energy inwards and release incongruent energy outwards. This extraordinary discovery inspired Meg Benedicte, to develop the healing modality Quantum Access®. Encoded within Metatron’s Cube are the 5 Platonic Solids and Star Tetrahedron (Merkaba) that act as the internal organizational structures of molecules in natural crystals. 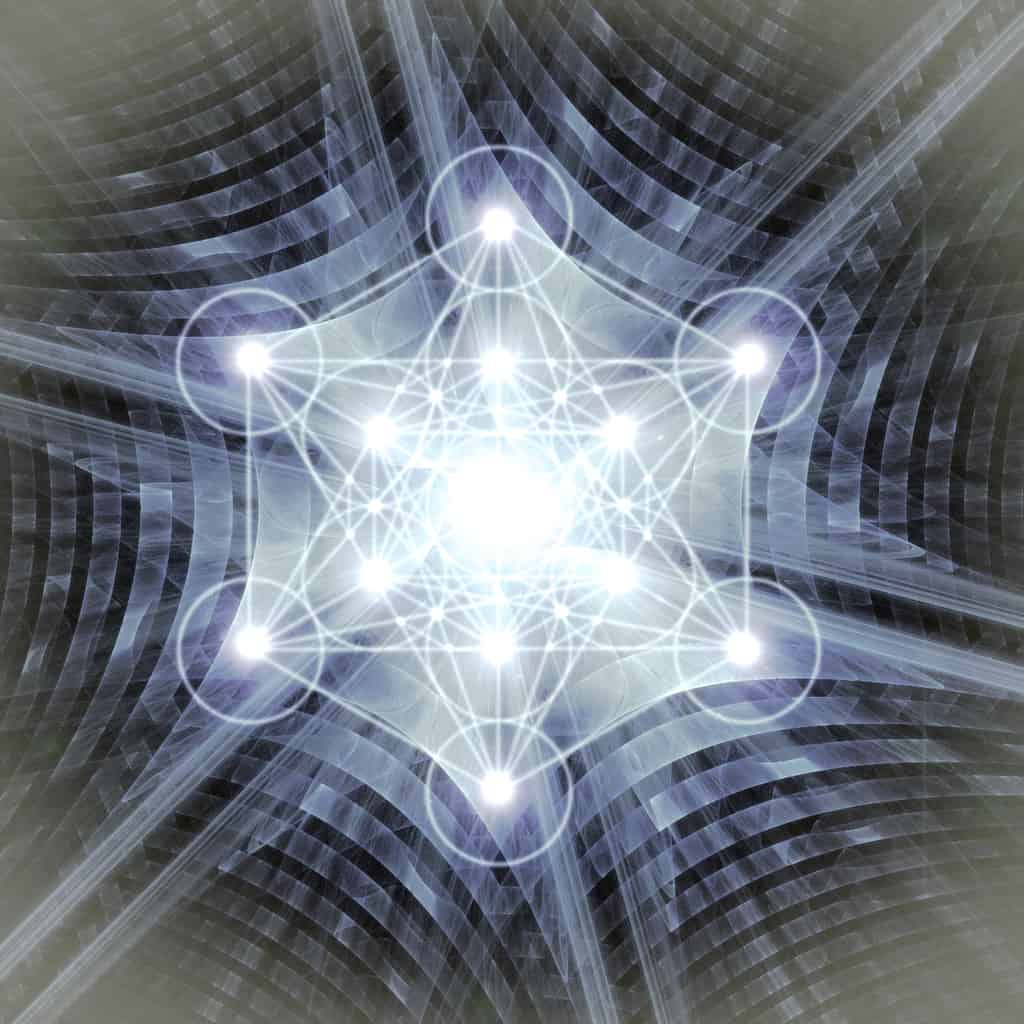 of the Soul Presence into the body.

Quantum Access® is the most effective, accelerated method to unlock molecular compression, time density and trapped emotional/mental/chemical information from the cells by neutralizing the gravitational field. Through the gradual healing and clearing of dense trauma, ancestral patterning, past-life karma and core wounding, we evolve into higher 5th dimensional frequencies, open communication with our Higher Self and deep Soul embodiment.

According to quantum physics, the universe we live in resembles a sea of motion − a quantum field of vibrant activity. All matter in the Universe is interconnected by waves of energy that spread out through time and space, so that every part of the Universe is touching every other part instantaneously in a unified field of ether. These waves oscillate through space, like ripples on a pond, as carriers of information.

All of life in the dynamic Universe emerges from a single pulse of light, from the multi-dimensional scalar standing wave pattern. Within the vacuum state of the Quantum Vortex beats the standing wave of singularity…the continual pulse of creation. It is the natural rhythm of life, like a cosmic heartbeat that fuels our Universe. There is growing astrophysical evidence that the vacuum structure found within the galactic zero point field also exists at the atomic scale level in our cells. As ancestors before us, we are discovering knowledge of the ancient mystery of Apotheosis.

The Zero Point Void is where matter and anti-matter merge to create new realities. The visiting gods documented the Science of Alchemy in timeless manuscripts, preserved inter-dimensionally as the Book of Knowledge, only accessible in the Zero Point Field. Through a series of remote viewing sessions, Meg Benedicte tapped into this ancient knowledge gath 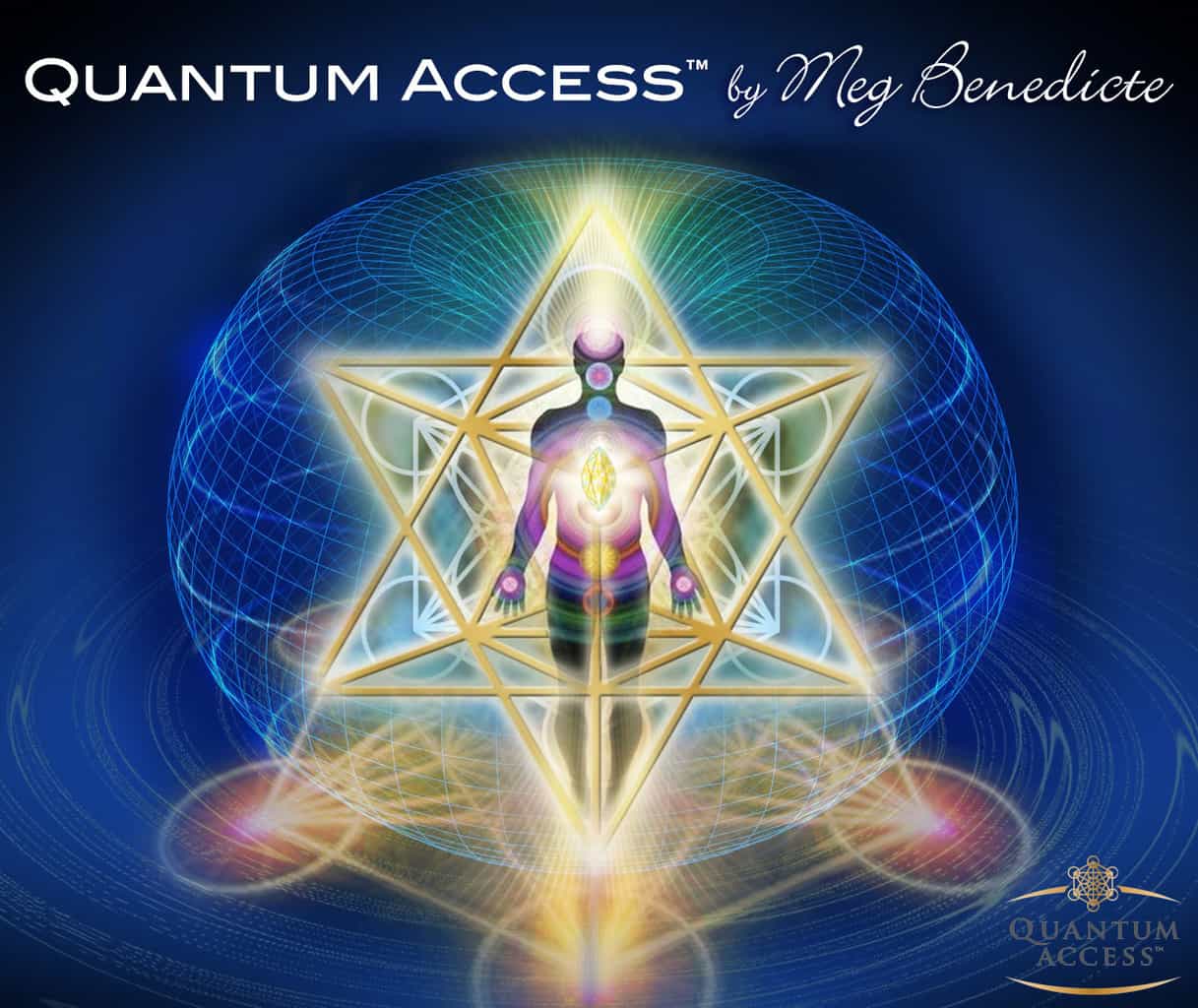 ered from her visitation incarnation during Zep Tepi Egypt.

The 12 spiraling cones or pillars of Metatron’s Cube vibrate with 12D harmonics that radiate outwards, forming a spiraling vortex around the source consciousness. By studying these forms of sacred geometry we can access the deeper knowledge and understanding of universal Intelligence – the consciousness of Creation….the ‘mind of god’!

Quantum Access® unlocks time barriers and density, allowing full access to the multi-dimensional quantum field of all possibilities. Within the sacred spiral of life, Quantum Access® awakens the hidden alchemist inside, so that you can transform your life!

For the past two decades, Meg Benedicte has been sharing these dramatic findings in her proprietary Quantum Access® modality, in quantum healings with Quantum Vortex Activations in Meditation CDs and podcasts, with global audiences in telecasts/webinars, radio shows and her book, Soul Realized: Unlocking the Sacred Keys of Becoming a Divine Human. We are evolving beyond the outdated medical model of medicine and surgery…into the quantum world of alchemy! Activate Quantum Access® to unlock and unblock your full potential now!